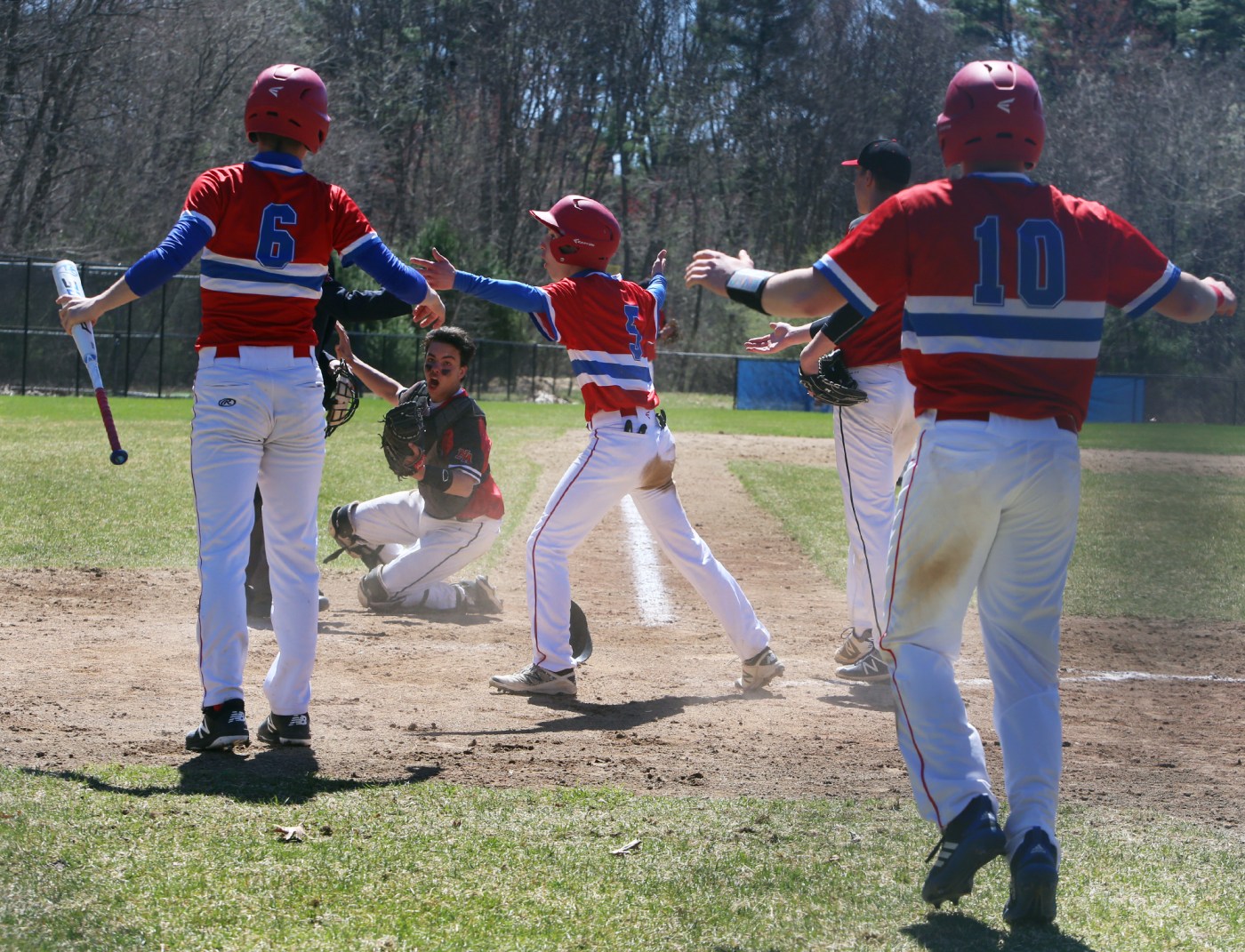 Matt Cooke clubbed a two-out RBI single in the 11th, as Tewksbury (2-8) took out Methuen in extra innings.

Locked in a 1-1 stalemate, Tewksbury rallied the troops as Ryan Flynn (two hits) singled heading to second off an Aiden Crogan sac bunt. Flynn advanced to third on dropped third strike to Dylan Paulding, giving Cooke the chance to end it. Cooke got the win in relief, pitching the last four innings giving up three hits, while fanning three.

The Redmen play North Andover, May 6 at home.

Nate Bushnell went 3-for-3 with a walk, scoring three runs. Isaac Zhang pitches six solid innings earning the win. The hurler helped his own cause going 2-for-3 (triple) driving in two runs.

Pitcher Ty Baker had an outstanding outing going six strong innings, allowing one earned run while fanning five, enroute to earning the team’s first win of the season. Braden Simard closed the door in the seventh. Alvirne hitter made solid contact throughout, striking out only twice.

Zack James went 3-for-5 with two doubles and three RBI, as Pelham stepped on Stevens.

Michael Archambault went 4-for 4 with a double and three RBI as North Middlesex beat Lunenburg. Leadoff hitter Michael Reardon drove in three runs with a single and a sac fly. Mason Livezey was also a cause for concern going 2-for-2 with two RBI.

Naomi Boldebuck laced two hits, while driving in the winning run off a sac fly, as Billerica beat Methuen.

The Ghosts generated its offense off eight hits. Junior Megan Strzegowski got the start for Westford. The righty lasted four innings, allowing three hits and a run while striking out two.

Ragini Kannan finish the game with a flurry, fanning seven.

The Rams host Bedford Wednesday, May 4 at 4 p.m.

The Cardinals offense struggled to gain momentum and lost to a tough Londonderry team. Senior captain Torey Hart had the only hit for BG. The Cards put together a rally in the top of the seventh but ended the game leaving the bases loaded. Senior Meghan Davey gave up two earned runs off of 10 hits, walking four, while striking out three.

Rylie Beisang laced two hits and played great behind the plate, but Pelham (2-6) succumbed to Stevens (3-4).  Christina Louh had a hit. Shaelyn Hinton had an RBI. Brooke Slaton scored a run and stole two bases.

Pelham takes on with Windham, Tuesday.

Jace Martin dropped a fifth singles match against Danny Bentancur 8-8(TB), 8-6, as Memorial made it past Alvirne.

The Broncos broke even in singles action. Peyton Meuse powered past Tiago Mendes at first singles 8-1. Ashton Meuse stymied Sean McCaffrey at second singles 8-0, while Caleb Lambert lanced Tyler Telge at fourth singles 9-7. However Aiden Hughes was hit with the fourth singles loss to Cam Brown 8-1, and Lucas Perron was defeated by David Ruge at sixth singles 8-5, with both teams breaking even

The match was ultimately decided in doubles action. Meuse and Meuse were able to upend Mendes and McCaffrey at first singles 8-0, but that’s as close as they would get. Hughes and Lambert were beaten by Brown and Telge at second doubles 8-0, before Perron and Anthony Ferullo fell to Bentancur and Ruge at third doubles 8-6.

CFA swept NT winning all seven matches. Ben Reese fought hard in the first singles position with some amazing playing, before bowing out to Adrianna Tabouchalani.

Lowell will look to regroup Wednesday, May 4, against. Lowell Catholic at Shedd Park.

Westford dropped the first set 28-18, before bouncing back 25-22 in the rematch. The Raiders continued to chip away taking the third set 25-20, forcing the Ghosts to regroup. Westford bounce back winning the fourth set, before taking the ensuing tiebreaker 15-13. Senior setter Aarush Singh fueled the Westford attack dishing 33 assists, as well as an ace and a block. He was bolstered by an amazing ensemble that refused to quit. Seniors Tejas Kudva (eight kills, two aces, block), Matthew Zegowitz (seven kills, six blocks, two aces), Jacob Holahan (six kills, two blocks) and libero Andy Lamprey (10 digs, two aces) were instrumental in the comeback.

Lowell was a constant threat sparked by setter Alex Chau (40 assists, seven digs), senior Izaviah Hing (17 kills) and Tevin Lout (16 kills). Lowell will look to bounce back as they visit Lawrence, May 4.

Ryan McShan had 21 kills and two blocks, as Central (3-9) won a back-and-forth battle with Chelmsford.

Trailing 25-19 after the first set, the Crusaders evened things 25-18 in the rematch. The Lions managed to put them on the ropes winning the third set 25-19, before Central stormed back 25-19, culminating with the 19-17 win in the tiebreaker.

Middie Tim Sturtz (goal, assist) got Littleton on the board early, and the Middles never looked back. Brady Decoste applied the pressure firing five goals and two assists. Brian Marrese made some nice move netting two goals and four points. Josh Manickam managed a goal and an assist.

In other action, the Crusaders crushed the Voke.

The Indians held a 7-1 edge at halftime guided by Sara MacLeod’s three goals, with Grace Leyne and Giovanna Gulinello also crashing the net. Goalie Katelyn D’Agostino made eight save for the win.

Goalie Alexa Kruger made 16 saves, but it wasn’t enough as Timberlane trampled Alvirne.

Jordan Sweeney created a stir causing five turnovers, but was unable to turn the tide against Timberlane’s Morill, and her five goal effort.

Mass and March for Life held by Diocese of Springfield

THE PANDEMIC: HAS THE COVID SPRINT TURNED INTO A MARATHON?