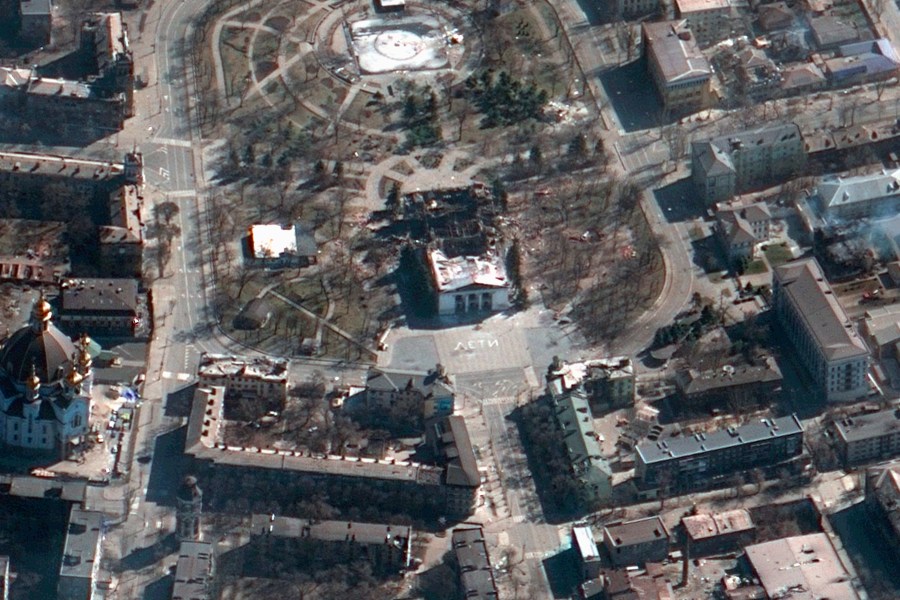 LVIV, Ukraine (AP) — Ukrainian authorities said Sunday that Russia’s military bombed an art school sheltering some 400 people in the embattled port city of Mariupol, where Ukraine’s president said an unrelenting Russian siege would be remembered for centuries to come.

It was the second time in less than a week that city officials reported a public building where residents had taken shelter coming under attack. A bomb hit a Mariupol theater with more than 1,300 believed to be inside on Wednesday, local officials said.

There was no immediate word on casualties from the reported strike on the art school, which The Associated Press could not independently verify. Ukrainian officials have not given an update on the search of the theater since Friday, when they said at least 130 had been rescued.

Mariupol, a strategic port on the Azov Sea, has been under bombardment for at least three weeks and has seen some of the worst horrors of the war in Ukraine. At least 2,300 people have died, some of whom had to be buried in mass graves, and food, water and electricity have run low.

“To do this to a peaceful city, what the occupiers did, is a terror that will be remembered for centuries to come,” Ukraine’s President Volodymyr Zelenskyy said in his nightly video address to the nation. “The more Russia uses terror against Ukraine, the worse the consequences for it.”

In recent days, Russian forces have battled their way into the city, cutting it off from the Azov Sea and devastating a massive steel plant. The fall of Mariupol would be an important but costly victory for the Russians, whose advance is largely stalled outside other major cities more than three weeks into the biggest land invasion in Europe since World War II.

In major cities across Ukraine, hundreds of men, women and children have been killed in Russian bombardments, while millions of civilians have raced to underground shelters or fled the country.

In the capital, Kyiv, at least 20 babies carried by Ukrainian surrogate mothers are stuck in a makeshift bomb shelter, waiting for parents to travel into the war zone to pick them up. The infants — some just days old — are being cared for by nurses who cannot leave the shelter because of constant shelling by Russian troops who are trying to encircle the city.

In the hard-hit northeastern city of Sumy, authorities evacuated 71 orphaned babies through a humanitarian corridor, regional governor Dmytro Zhyvytskyy said Sunday. He said the orphans, most of whom need constant medical attention, would be taken to an unspecified foreign country.

Russian shelling killed at least five civilians, including a 9-year-old boy, in Kharkiv, an eastern city that is Ukraine’s second-largest.


There’s another reason gas prices are about to rise

The British Defense Ministry said Russia’s failure to gain control of the skies over Ukraine “has significantly blunted their operational progress,” forcing them to rely on stand-off weapons launched from the relative safety of Russian airspace.

A rocket attack on the Black Sea port city of Mykolaiv early Friday killed as many as 40 marines, a Ukrainian military official told The New York Times, making it one of the deadliest single attacks on Ukrainian forces.

In a separate strike, the Russian Defense Ministry said a Kinzhal hypersonic missile hit a Ukrainian fuel depot in Kostiantynivka, a city near Mykolaiv. The Russian military said Saturday that it used a Kinzhal for the first time in combat to destroy an ammunition depot in the Carpathian Mountains in western Ukraine.

Russia has said the Kinzhal, carried by MiG-31 fighter jets, has a range of up to 2,000 kilometers (about 1,250 miles) and flies at 10 times the speed of sound. Pentagon press secretary John Kirby said Saturday that the U.S. couldn’t confirm the use of a hypersonic missile in Ukraine.

Konashenkov said Kalibr cruise missiles launched by Russian warships from the Caspian Sea were also involved in the strike on the fuel depot in Kostiantynivka and were used to destroy an armor repair plant in northern Ukraine.

Unexpectedly strong Ukrainian resistance has dashed Russian President Vladimir Putin’s hopes for a fast victory after he ordered his troops to invade Ukraine on Feb. 24.

U.N. bodies have confirmed more than 847 civilian deaths since the war began, though they concede the actual toll is likely much higher. The U.N. says nearly 3.4 million people have fled Ukraine as refugees.

Estimates of Russian deaths vary widely, but even conservative figures are in the low thousands. The reported battlefield deaths of four Russian generals — out of an estimated 20 deployed in Ukraine, suggest an impaired command of the fighting, said Dmitry Gorenburg, a researcher on Russia’s security at the Virginia-based CNA think tank. Gorenburg said.

Russia would need 800,000 troops — almost equal to its entire active-duty military — to control Ukraine in the face of prolonged armed opposition, according to Michael Clarke, former head of the British-based Royal United Services Institute, a defense think tank.

“Unless the Russians intend to be completely genocidal — they could flatten all the major cities, and Ukrainians will rise up against Russian occupation — there will be just constant guerrilla war,” Clarke said.

Ukraine and Russia have held several rounds of negotiations aimed at ending the conflict, but the neighboring countries remain divided over several issues. Zelenskyy has said he is willing to drop Ukraine’s bid to join NATO but wants certain security guarantees from Russia. Moscow is pressing for Ukraine’s complete demilitarization.

Evacuations from Mariupol and other besieged cities proceeded along eight of 10 humanitarian corridors that Ukraine and Russia agreed to on Saturday, Deputy Prime Minister Iryna Vereshchuk said, and officials said a total of 6,623 people left Kyiv and other cities.

Vereshchuk said planned humanitarian aid for the southern city of Kherson, which Russia seized early in the war, could not be delivered because the trucks were stopped along the way by Russian troops.

Mariupol authorities said Sunday that nearly 40,000 people had left the city in the last week, the vast majority in their own vehicles, despite ongoing air and artillery strikes.

The Mariupol city council claimed Saturday that Russian soldiers had forcibly relocated several thousand city residents, mostly women and children, to Russia. It didn’t say where, and AP could not immediately confirm the claim.

Some Russians also have fled their country amid a widespread crackdown on dissent. Since the invasion of Ukraine started, police have arrested thousands of antiwar protesters, while government agencies have silenced independent media and cut off access to social media sites like Facebook and Twitter.

In Ukraine, Zelenskyy on Sunday ordered the activities of 11 political parties with links to Russia to be suspended during the period of martial law. The largest of those parties has 44 out of 450 seats in the country’s parliament.

“Activities by politicians aimed at discord and collaboration will not succeed,” he said in the address.

All About United States Of America | Location, National…

Veteran walks from Chicopee to the Statehouse to bring…

AP sources: NHL to withdraw from Olympics after COVID surge…