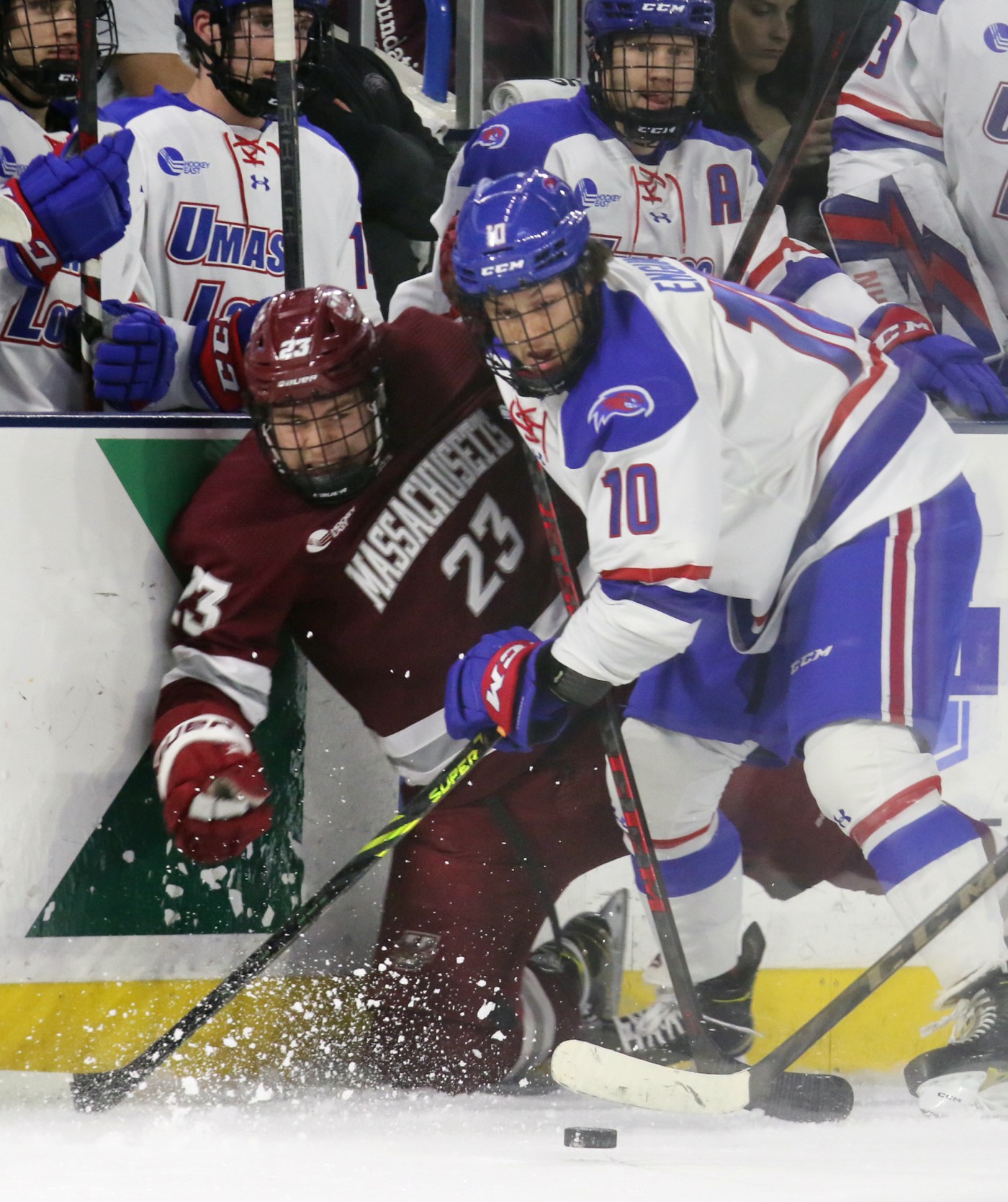 LOWELL — For five straight year between 2013-17, life’s three certainties were death, taxes and UMass Lowell playing for the Hockey East championship in Boston.

A pair of factors can explain the drought. One, it’s very difficult to be one of the last four teams standing in Hockey East. Two, the pandemic. The 2020 championship was canceled due to COVID-19. UML advanced to the 2021 championship game, but a 1-0 loss to UMass was played in Amherst in front of no fans.

Now the 13th-ranked River Hawks (21-9-3) are Boston-bound again. They will face UMass in a semifinal Friday at 7:30 p.m. The day will mark the fifth anniversary of UML’s last appearance at the TD Garden, a 4-3 victory over Boston College in the 2017 championship game.

No UML player has skated at the TD Garden, home of the Boston Bruins and the epicenter of hockey in New England.

“Giving these kids an opportunity to play at the Garden is a big deal,” head coach Norm Bazin said. “For some, it’s going to be the highlight of their career.”

Connecticut and Northeastern will clash in the 4 p.m. semifinal. The TD Garden is expecting to be buzzing Friday.

UML led all New England schools in average attendance (4,532) at the Tsongas Center. Drawing 81,573 fans over 18 games, UML ranks 10th in the nation. Penn State is the only Eastern school which averaged more fans than UML.

“There’s nothing like playing in front of a crowd,” Bazin said. “Last year it was tough to play in front of no fans. We have the best fans in Hockey East and we showed it again this year.”

UML released a tweet Wednesday saying all student fan buses from campus to the TD Garden were sold out, a sign that the student body is excited for the program’s first game in Boston in five years.

Junior Andre Lee, who leads UML with 16 goals, has gone to games at the TD Garden. But playing in one there? Lee sported an ear-to-ear grin following Monday’s practice.

“It’s crazy. It’s a huge place, obviously. It’s the home of the Boston Bruins and the Boston Celtics,” junior defenseman Marek Korencik said. “I really hope all the fans will come out. It’s always so nice to see all the people cheering for you.”

Freshman defenseman Isac Jonsson became the second UML defenseman to dish out three assists this season when he did so in the 7-2 quarterfinal round win over Merrimack. Grad student Nick Austin did it two weeks earlier against Long Island. … Jonsson and sophomore defenseman Brehdan Engum both finished the Merrimack game with a +5 rating. … Depth scoring is again a strength of the River Hawks: 12 players have scored 10 or more points and two others, junior forward Zach Kaiser and senior defenseman Jon McDonald, need one point to reach 10. … Grad student Connor Sodergren will play in his 153rd career game Friday. Austin (143), Lucas Condotta (119), Jon McDonald (108) and Reid Stefanson (101) will also provide leadership to their younger teammates. … Bazin is 8-2 at the TD Garden. … UML commit Jaiden Moriello was named Neutral Zone’s Offensive Player of the Year and its Most Valuable Player runner-up among prep school players. Moriello is a senior at Kimball Union Academy. He led all prep skaters with 32 goals during the regular season. … A win Friday will almost certainly ensure the River Hawks of gaining a berth in the 16-team NCAA Tournament. They are currently 13th in the all-important PairWise rankings. … UML has scored 19 goals during its four-game win streak. … Bazin’s boys allow an average of 2.06 goals per game, fifth best in the nation.

Rolled over car on Liberty St. in Springfield

Troopers: At least 24 injured, one dead in shooting at Dumas…

The Most Generous’ UK visa set for launch In 2022 | Sponsor…