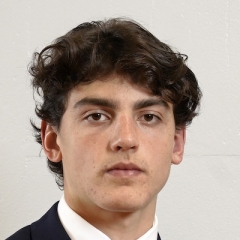 Six players with local ties were selected Tuesday in Phase II of the United States Hockey League Draft, including the No. 1 overall pick.

Going first in the 24-round draft was UMass Lowell commit Jak Vaarwerk, an 18-year-old native of East Amherst, N.Y.

A center, Vaarwerk was taken by Des Moines. He is having a terrific season with the Jamestown Rebels of the North American Hockey League.

Phase I was held Monday. Phase II is open to players of all ages not currently protected by another USHL team who are eligible to play junior hockey.

Fisher, who starred this past winter at Belmont Hill, went ninth overall to Youngstown. He tallied 17 goals and 28 points in 27 games for the New England prep school power. He will play at Northeastern University.

The fifth overall goaltender selected was Kristoffer Eberly. A native of Pinckney, Mich., he was a third-round pick (33rd overall) of Green Bay. Eberly went 15-15-2 with a 2.71 goals against average for the Hudson, N.H.-based Northern Cyclones.

Eberly, 19, also played four games with Sioux City of the USHL, going 3-1 with a 2.91 goals against average.

Also going in the third round was UMass Lowell commit Daniil Dolzhenko, a native of Omsk, Russia. He went to Green Bay with the 39th overall selection. Dolzhenko joined the Minnesota Magicians of the NAHL after Christmas and produced immediately.

The 17-year-old defenseman had four goals and 16 points in 23 games before an injury ended his campaign. Like Vaarwerk, he’s expected to arrive at UML in 2023.

Taken in the fourth round, as the eighth drafted goaltender, was Westford native Colin Winn. Youngstown tabbed Winn with the 60th overall choice. Winn starred for the Boston Jr. Bruins this season, going 25-12-5 with a 2.58 goals against average. Winn played one season at Westford Academy before going the junior route.

A third UMass Lowell commit, forward Jaiden Moriello, went in the 12th round (181st overall) to Sioux City. A native of Saugus, Moriello has been one of the prep players in New England. He received several accolades while scoring 33 goals in 33 games for Kimball Union Academy.

Moriello, who played for ex-UMass Lowell coach Tim Whitehead, chipped in 14 assists. Moriello has committed to play for West Kelowna of the British Columbia Hockey League.