VIDEO: Six migrants run across I-10 at Executive 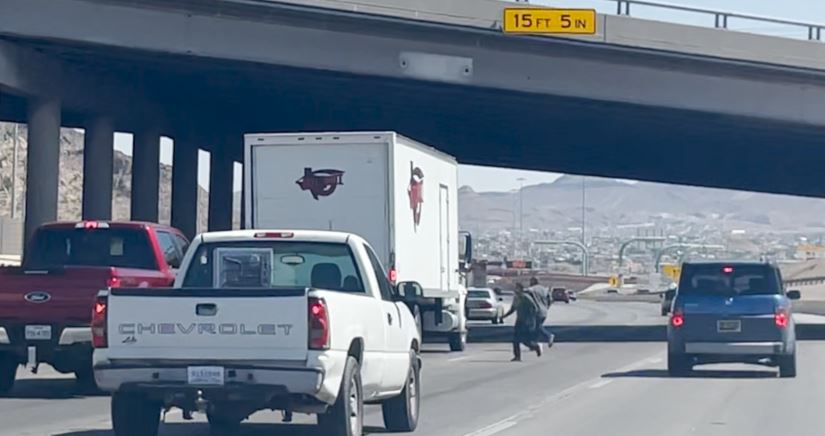 EL PASO, Texas (KTSM) While on the way to an assignment driving Eastbound on I-10, a KTSM 9 News crew saw a group of migrants running across I-10 at Executive Boulevard.

Vehicles could be seen slowing down coming to a stop while migrants weaved in and out.

The migrants made it to the other side and a few seconds later a border patrol unit could be seen.

U.S. Border Patrol confirmed that a total of six migrants were apprehended in the Executive Boulevard area on Friday.

The incident on I-10 and executive happened a little after 3 p.m. However, another KTSM crew doing a live shot for the 5 p.m. news near the border fence saw what appeared to be two migrants being put in Border Patrol units.

According to U.S. Border Patrol’s mid-year review, migrant encounters in the West Texas and New Mexico region are up 57 percent in 2022 to date compared to 2021.

“When these numbers go up you know the dangers go up. The rescues are agents make but the migrants attempting to cross our highways those encounters also go up as well,” said Carlos Rivera, a spokesperson for the U.S. Border, Patrol El Paso Sector.

However, he says the highway isn’t the only danger migrants encounter when crossing the border.

“First of all the river itself, the border barrier system, in parts of our sector we have water canals for irrigation and also the highways that are adjacent to that barrier,” said Rivera.

A Look Up and Down Newbury Street, Boston, Massachusetts

Portion of Kings Highway closed in West Springfield due to…