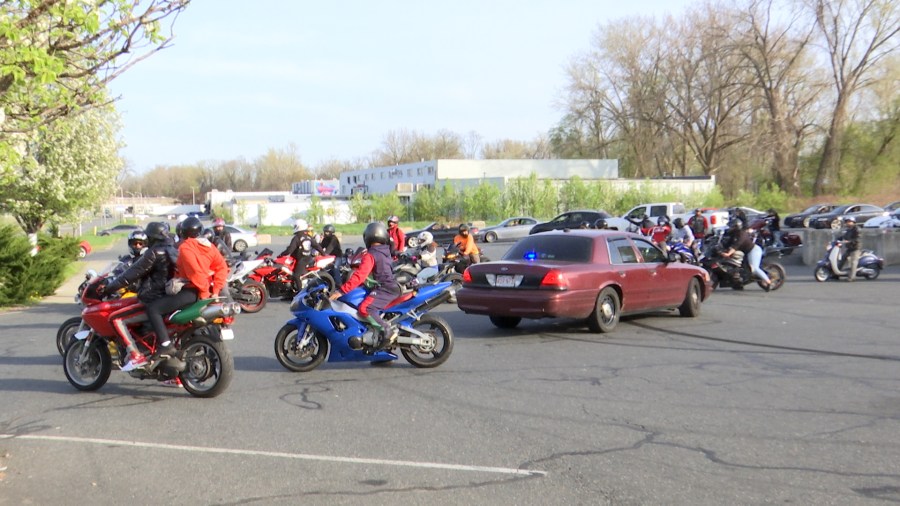 Local bikers came together Monday night to remember a fellow rider and friend. But to also send out a message: be careful out on the roads.

“Anytime we put that kickstand up we all take that same risk to not be with our families,” said Crystal Morales from 413 Mass Riders. “So when someone doesn’t make it back home, it hits different because that could have been one of us.”

“Be considerate on the road,” added Vlad Tsvor, a friend of the victim. “And drivers, be considerate around bikers as well.”

The motorcyclist died from their injuries following a crash on Route 5 in West Springfield late Saturday night. Police say speed was a factor in the incident.

“We just want everyone to be safe out there on their bikes. We don’t want to be losing people,” said John Chuduk, who was also a friend of the victim.

And motorcycle-related accidents have been on the rise here in the state.

According to the state’s Impact Crash Portal, there were just over 1,800 motorcycle accidents last year, and 70 of them were fatal. That data showing that 2021 saw the most motorcycle fatalities here in Massachusetts since 2010.

Bikers asking drivers to be extra cautious as more motorcycles are out on the roads.

“All you have to do is look twice,” Morales said. “It could save somebody’s life, somebody’s mom, somebody’s son. My life has been saved numerous times by people looking twice. We don’t have airbags, we don’t have seatbelts, we got helmets. We are on bikes, so be cautious and be vigilant. Just because we are on our bikes doesn’t mean we are less human.”

The victim’s identity has not yet been released.

Is A Weather Weapon In Cuba Causing Northeasterly To…

Rudi Scherff, former owner of The Student Prince and The…

Rainbow in the sky following Saturday’s storm and hail

Congamond Lakes closed to boats due to rising water levels

Here are the states that have passed laws restricting or…