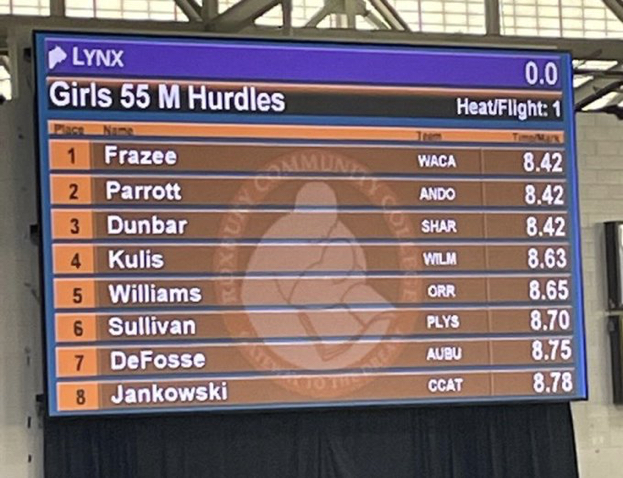 BOSTON — In an absolute photo finish, Westford Academy’s Megan Frazee was ahead by just a thousandth of a second.
Frazee, who later placed second in the long jump (18-02.75) and third in the high jump (5-2), beat out Andover’s Jodi Parrott and Sharon’s Simone Dunbar to win the 55-meter hurdles in 8.42 seconds during Saturday’s Meet of Champions at the Reggie Lewis Center.
“I’ve never had a race come down to the thousandth of a second before. It’s definitely thrilling seeing your name up there and trying to figure out if you won or if you didn’t win,” said Frazee.
She said that she raced four previous times against Parrott, only winning once in a preliminary race, so this one was certainly satisfying.
“(To win) is just really rewarding because I have put in a lot of effort this season to work on my hurdle form (and it’s paying off). I’m really excited about this and I know my coaches are excited because I had a personal record,” said Frazee.
The other local first-place finish came from Littleton’s Shae Regan, who demolished the field in the two mile. She came in at over 21 seconds ahead of the runner-up with a time of 10:54.59.
“I wanted to take (my start) out a little harder to create a little separation and then I wanted to maintain that for the second half of the race. I think I did that pretty welI,” she said. “It’s pretty exciting. I have never qualified for the indoor all-state meet before. I’m happy that I was able to get here and now really happy to win.”
In the 600, Medfield’s Alex Busby got out to a strong start, but Billerica’s Emily Burdick stayed within range to come in second at 1:36.73.
“(Busby) got out really, really hard. I really wanted to focus on the first lap and get out strong and she also did a nice job so it was nice staying on her as long as I could. I just wanted to stick with her the whole time,” said Burdick. “Going into a race like this, you have to think that anything can happen, and it’s the all-states so everyone is going to go out as hard as they can. You just have to adapt to whatever the situation is once that gun goes off.”
Also finishing in the top six of their respective events to qualify for next weekend’s New England Championships were fourth-place finishes from Wilmington’s Celia Kulis in the 55-meter hurdles (8.63) and Regan in the mile (5:04.74). In the dash, Ijeoma Ezechukwu of Ayer-Shirley was fifth at 7.37 and Dracut’s Ava Soucy was seventh at 7.46, while Ezechukwu was also fourth in the 300 at 40.91 and Lowell’s Rebecca Cady was ninth at 41.87.
In the 1,000, Billerica’s Anna McElhinney placed seventh at 3:01.41. Kulis was fourth in the high jump (5-2) and Soucy was seventh in the long jump at 17-00.00.
In the relays, Lowell’s 4×200 team was second at 1:47.01 behind the efforts of Anneliese Nogueira, Cady, Morgan Bilodeau and Bridget Geary, while the Groton-Dunstable team of Lindsey Earle, Cassidy Heulings, Sienna Salyer and Danielle Thompson was sixth at 1:47.01.

Best of the rest

Moose rescued after falling into basement of Colorado home

Coyle gets OT winner as Bruins rally past Sabres, 4-3 –…

What he Captured on Camera Surprised the Whole World…